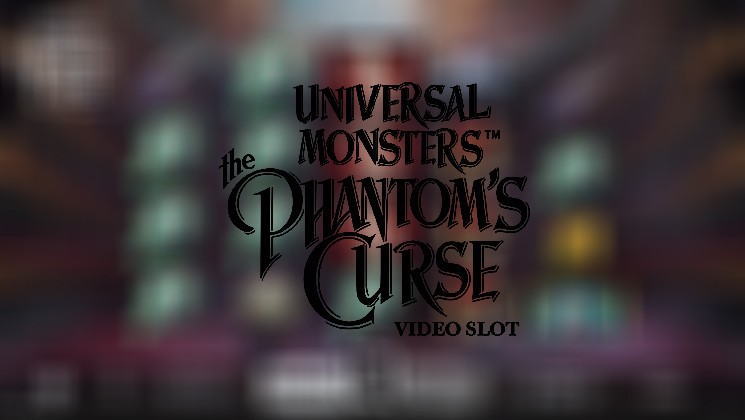 Universal Monsters: The Phantom’s Curse is a five reel video slot powered by one of the software provider NetEnt. Video slot takes its inspiration from Universal gallery of monsters: Phantom of the Opera. Reels are transparent and set up  against opera stage covered in fog, setting overall haunted atmosphere. Slot have three tier of pay symbols, low value are clubs, spades, hearts and diamonds, medium are a knife, a white pearl, a yellow rose and a ring with a red gem. Top tier symbols are Christine and the Phantom himself. Before investing real money players can try Universal Monsters: The Phantom’s Curse Slot for free, or visit any NetEnt casino such as: Mr.Bet Casino, PlaySunny Casino, Campeon Casino and others to play with real money and win.

Before you see how the story unfolds, bets need to placed. Like in all standart NetEnt slots giant button in the middle is a “Spin”. To adjust value of one coin use “Coin Value” button which goes from 0.01 to 1. By clicking “Level +/-” button you set up number of coins per line. With “Max Bet” button you can start the game with highest bet amount. You can use “Autoplay” to choose number of spins that will go automatically. 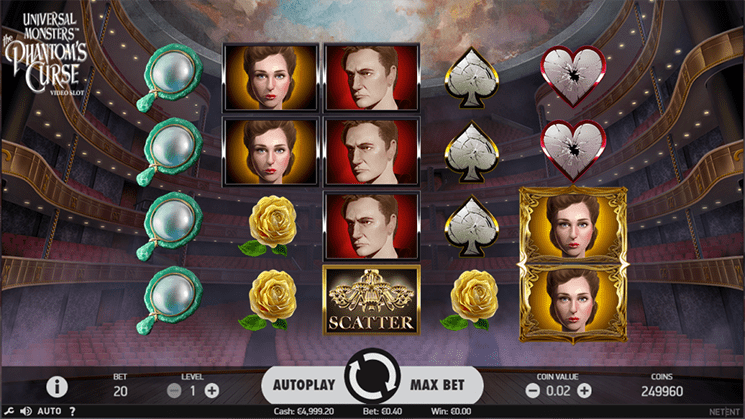 The famous Mask of the Phantom is a Wild symbols which is used as a substitute to other symbols, except for the Scatter and the Bonus symbols.

Pick and Click is a 2 stage bonus game which is activated as soon as Stacked Phantom and Stacked Christine symbols land on the first and last reels simultaneously. During first stage you will pick roses which will award you with coin wins untill you run into an X, after the X you will be transferred to second stage. In the second stage you have to choose 1 out of 3 mirrors, which will award you with the multiplier for the coin wins.

Free Spin feature is triggered when Scatter symbol, which is a Chandelier, land on the 1, 3 and 5 reels. A Masked Phantom will appear cutting rope which hangs a Chandelier. After the Chandelier falls, the feature will end.

Re-spin feature activates when Stacked Phantom and Stacked Masks land on the 1 and 5 reels.