Twin Spin deluxe comes with six reels and the cluster pays feature. The slot can be played on mobile devices and desktop computers. You can make bets with as little as 10p to as much as £100 for a single spin. With the cluster pays, winning combinations are formed when you get nine symbols of the same kind and you can make up to 1,000 times your stake on every spin. To make things easy for you, there is the Twin Reel feature where two to six reels can become linked to adjacent reels to show similar symbols. Before investing real money players can try Twin Spin Deluxe Slot for free, or visit any NetEnt casino such as: Loki Casino, Mucho Vegas Casino, Chomp Casino and others to play with real money and win.

Twin Spin Deluxe has a similar set up to the original Twin Spin. The graphics are similar you still get the same futuristic feel. The soundtrack will definitely remind you of an Ibiza nightclub. Just like a club’s lighting, the symbols have a neon lighting finish. These symbols are K, A, I and Q; to complement the theme, the symbols you will come across include bars, cherries, blue diamonds and red 7s. 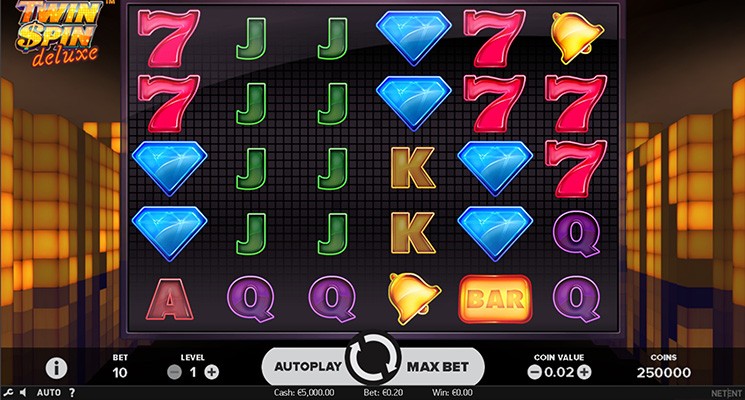 For a winning combination to be formed, there should be nine or more of the same symbols appearing in a cluster. There will be a cluster formed when a symbol is vertically or horizontally adjacent to a symbol of its kind. As for the symbol values, the playing card symbols have the ability to pay 10 times your stake when you have 30 in a cluster.

As for the cherries and the bells, they can pay as much as 250 times the bet amount while the bars and red 7s will pay as much as 500 times the bet. The highest valued symbol is the blue diamond that will give you 1000 times your bet when you have thirty in a cluster. This deluxe version also makes use of the Twin Reel Feature where every spin will start with similar, adjacent twin reels linked together. The twin reels have the ability to take over three, four, five or six linked adjacent reels. They will display similar symbols and this means that it’s easier to come up with the big clusters.

Once a week, on Fridays, in the Magical Spin Casino there is a Friday Spins bonus available to claim that contains a 40% match bonus and 40 free spins in one of the popular NetEnt slots.

Bored of just making spins? Participate in one of the Winolla Casino weekly tournaments and try to win a share of the €$2000 prize pool!

Monday is just another day of the weekends in the King Billy Casino: keep on playing, and you'll receive an immersive extra weekends bonus that contain €$100 + 25 Free Spins!