London Hunter is a 5 reel and 25 paylines progressive video slot powered by Habanero software. Theme of the video slot is inspired by the by 19th-century industrial steam-powered machinery or in other words SteamPunk. In additon music in the background provide you with the appropriate to its era atmosphere. London Hunter slot have pretty standart symbol layout, low value symbols are your standart playing cards (from J to A), whereas high value symbols are Hunter and his gun, dog and others. Before investing real money players can try London Hunter Slot for free, or visit any Habanero Casino such as: Crazy Fortune Casino, Campeon Casino, Mr.Bet Casino and others to play with real money and win.

Before you start your adventure on the streets of Victorian London, your bet needs to be placed. “Coin +/-” ranges from 0.01 to 20. “Bet Level” button is for adjusting number of coins per line, and it goes from 1 to 10. For highest bet value use “Max Bet”. While using “Autoplay” player can choose number of spin will be played automatically and to start the game just click “Spin”. 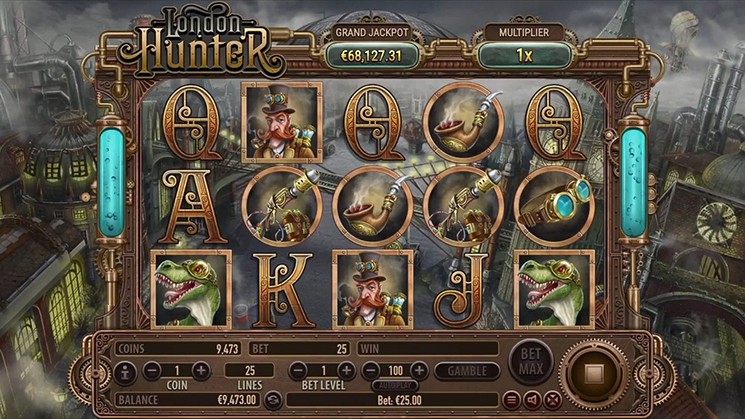 T-Rex symbol is a Wild, it can be used as a substitute to other symbols. In addition Wilds appear only on the 1 and 5 reel, also they can expand turning into 2×2 block.

On the both sides of the reels are two blue tanks that will go full over time. When the Right Tank reaches its full capacity during main game, Wild Expansion feature will be activated. Unfortunately when the T-Rex lands on the reels during main game feature will end. On the bright side Wild Expansion is always active during bonus game. When T-Rex and Hunter symbols hit the reels during bonus game, Wild will expand to 2×2 and awarding you with x3 multiplier.

When the Hunter appear on the 1st reel, his gun on the 2nd and T-Rex on the last you will activate Free Games feature. This is basically a Free Spins feature, if your Left Tank is full in the start of the feature or during it your multiplier will go till x3. If Both Tanks are full during this feature you will also be awarded with extra 2-6 free spins.

Play in the ZigZag777 Casino during the week and receive a 15% cashback bonus! You can enjoy thousands of video slots, and in case you lose, the casino will pay back you up to €/$1000.

Play live casino games provided by Evolution Gaming in the DinoSpin Casino and receive a 20% daily cashback bonus that will be paid with no wagering requirements!

FreakyAces Casino and Pragmatic Play has united together to prepare an outstanding free spins deposit bonus offer; simply make a deposit in the casino and receive 100 Bonus Spins on the "Book of Tut" slot!